On 9 September 2015, at 17:30 BST Her Majesty, Queen Elizabeth II had reigned for 23,226 days, 16 hours and approximately 30 minutes – surpassing the reign of her great-great-grandmother Queen Victoria. There were no formal celebrations, no parties or musical celebrations planned. It was very much business as usual for Her Majesty, as she spent the day in Scotland, not diverting from the normal dairy of duties which had been scheduled well in advance. Speaking about her new milestone in becoming the longest reigning sovereign in British history, The Queen stated that the title as “not one to which I have ever aspired”.

The BBC reported the days events as follows:

The Queen has thanked well-wishers at home and overseas for their “touching messages of kindness” as she becomes Britain’s longest-reigning monarch.

Speaking in the Scottish Borders, the 89-year-old monarch said the title was “not one to which I have ever aspired”.

At 17:30 BST she had reigned for 23,226 days, 16 hours and approximately 30 minutes – surpassing the reign of her great-great-grandmother Queen Victoria.

David Cameron said the service the Queen had given was “truly humbling”.

Dressed in turquoise with her trusty black handbag at her side, the Queen spoke briefly to the gathered crowds earlier.

“Inevitably a long life can pass by many milestones – my own is no exception – but I thank you all and the many others at home and overseas for your touching messages of great kindness,” she said.

In the day’s main events:

The exact moment the Queen became the longest-reigning sovereign is unknown. Her father, George VI, passed away in the early hours of 6 February 1952, but his time of death is not known.

Business in the Commons was postponed for half an hour so that MPs, led by Mr Cameron, could pay tribute to the Queen.

The prime minster said she had been a “rock of stability” in an era when so much had changed, and her reign had been the “golden thread running through three post-war generations”.

He said it was “typical of the Queen’s selfless sense of service” that she thought today should be a normal day.

Acting Labour leader Harriet Harman said it was “no exaggeration” to say the Queen was “admired by billions of people all around the world”.

Ministers are to present the Queen with a bound copy of cabinet papers from the meeting in 1952 when Sir Winston Churchill’s government approved the content of her first Queen’s Speech.

In the House of Lords, leader Baroness Stowell said the Queen had served the country with “unerring grace, dignity and decency”, adding: “And long may she continue to do so”. 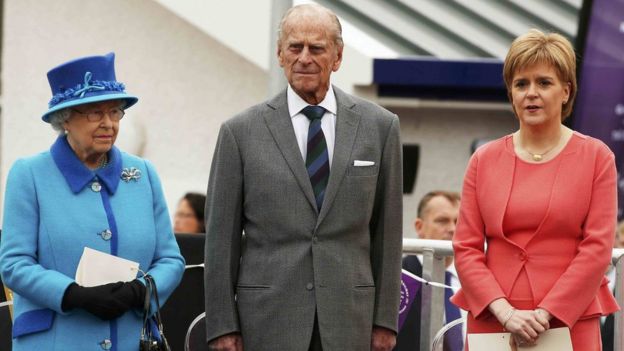 There have been glowing tributes and much talk about the significance of this moment. No such words were uttered by the subject of all the attention.

She undertook a run-of-the-mill engagement on a far from run-of-the-mill day. And in her brief remarks – her lengthy reign hasn’t lessened her aversion to making speeches – she displayed some classic British understatement.

Overtaking her great-great-grandmother wasn’t something she’d ever aspired to, she said. She was simply the beneficiary of a long life.

In Scotland – and indeed in other parts of the United Kingdom – that life and her reign have been celebrated very publicly.

Privately, later, the Queen will mark the moment she enters the record books. Prince Philip will be with her – her husband of 67 years has been the one constant in a reign of sometimes dizzying change.

This is where she holds weekly audiences with prime ministers of the day, and receives visiting heads of state and government.

The Queen is taking her traditional summer break at this time of year at her private Scottish home, Balmoral.

The Duke and Duchess of Cambridge are in Scotland on holiday and are expected to have dinner with the Queen at Balmoral later.

Queens of the modern age

Elizabeth and Victoria in numbers

Woman who redefined the monarchy

Queen Victoria became queen at the age of 18 and ruled for 63 years, seven months and two days.

One of those prime ministers, Conservative Sir John Major, rejected any suggestion the Queen had been too passive as head of state: “The monarchy wouldn’t be as popular if they were part of politics – they’re above and beyond it.

“But when the Queen meets her prime minister she has the opportunity to question, to ask, to counsel. Nobody knows and no prime minister is going to tell you exactly what happens at those meetings. So those who say she’s been too passive, how can they possibly know?”

The Queen is Head of the Commonwealth and sovereign of 15 Commonwealth realms in addition to the UK, and the organisation’s Secretary-General, Kamalesh Sharma, sent his congratulations.

“As a symbol of continuity during decades of unprecedented change, and by drawing our people together in their rich diversity, Her Majesty has embodied all that is best in the Commonwealth,” he said.

“With vision and dedication her example has encouraged successive generations of leaders and citizens to embrace the promise of the future.”

This website stores cookies on your computer. These cookies are used to collect information about how you interact with our website and allow us to remember you. We use this information in order to improve and customise your browsing experience and for analytics and metrics about our visitors both on this website and other media. To find out more about the cookies we use, see our Privacy Policy. If you decline, your information won’t be tracked when you visit this website. A single cookie will be used in your browser to remember your preference not to be tracked. Privacy & GDPRAcceptDeclinePrivacy & GDPR
Thanks for subscribing!