Over recent years numerous opinion polls have been carried out by recognised and respected polling organisations, these show that the Monarchy has clear majority support in the United Kingdom and that only a minority wish to abolish the Monarchy and become republic. In 2016 Ipsos MORI conducted a poll which asked the question: “Are you satisfied or dissatisfied with the way the Queen is doing her job as Monarch?”, to which 86% of the nation identified as being satisfied with her job performance.

The latest YouGov poll which was conducted in May of 2018, gave deep insight into who are Britain’s Monarchists and further that a strong 7 out of 10 Britons continue to support and want a Monarchy. The YouGov poll went on to conclude:

Over two-thirds (69%) of Britons are monarchists. This figure is more than three times higher than the number who oppose (21% don’t want a Royal family), with the remaining 11% saying they don’t know either way.

While the majority of people in all age groups support Britain having a monarchy, the older Britons are the higher this level of support gets: 57% of 18-24 year olds are monarchists, a figure which rises to 77% among those aged 55 or older. While men and women overwhelmingly support Britain having a monarchy (67% and 70% respectively), men (25%) are more likely than women (17%) to oppose it.

In geographical terms, support for the monarchy is noticeably lower in Scotland than in the rest of Britain. Even here, however, the majority of people (53%) still support Britain having a monarchy, compared to 36% who oppose.

Being a Conservative voter is a key factor in whether or not someone supports Britain having a monarchy. In 2017, 49% of monarchists who voted backed the Conservatives (compared to 13% of those who oppose anti-monarchists). By contrast, only 34% of monarchists voted Labour, compared to 61% of people who don’t want a Royal family.

Monarchists are slightly more likely to be Leave voters, with those who cast a ballot in 2016 splitting 56%/44% in favour of Brexit, while those oppose Britain having a Royal family voted 65%/35% in favour of Remain.

Monarchists are much more likely to display a sense of national pride than non-monarchists. Almost eight in ten (79%) describe themselves as either “very” or “quite” patriotic (compared to 41% of non-Royalists). Almost nine in ten monarchists (87%) state they are proud to be British, 81% make an effort to support British businesses and 74% prefer to buy British brands. Among those who don’t want a monarchy these figures are 55%, 61% and 52% respectively.

While monarchists obviously hold the royal family in high regard, which royals do they like the most? The results reveal that the Queen is monarchists’ favourite royal, with 92% saying they like her. In second place is Prince Harry on 87%, followed by older brother William on 83% and wife Kate on 82%. 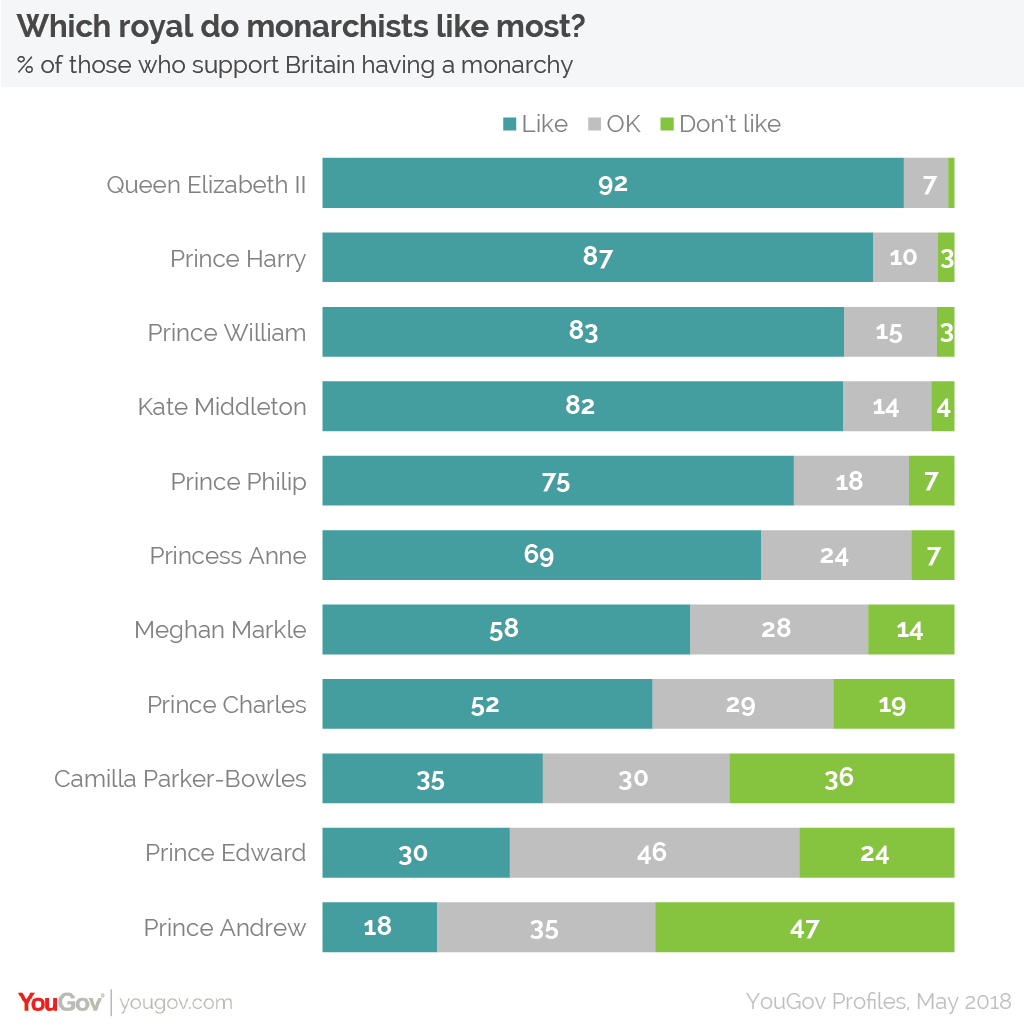 Forthcoming addition to the family Meghan Markle is liked by 58% (but only disliked by 14%), making her more popular than Prince Charles (52%), Camilla Parker-Bowles (35%) and Princes Edward (30%) and Andrew (18%). As well as being the least well-liked, Prince Andrew is also the member of the Royal family that monarchists actively dislike the most (47%).

The polling company Ipsos MORI has put forth numerous polling questions over the years pertaining to the Royal Family, The Monarchy and The Queen herself. The following list of questions are directly linked to the Ipsos MORI website with comprehensive results.

A full comprehensive list of Royal related polling questions with results and statistics can be found via Ipsos MORI by clicking here.

The following graph shows support for retaining the monarchy or becoming a republic from 22 polls conducted by the polling group Ipsos Mori between 1993 and 2011.

Q: Are you satisfied or dissatisfied with the way the Queen is doing her job as Monarch?

The iPSOS mori graph shows a clear trend over time that is consistently demonstrated in polls conducted by other polling organisations. In almost all polls support for becoming a republic remains no higher than 20%, whilst the overwhelming majority of around 70% support the continuation of the Monarchy. If the above graph showed changes in political voting intentions over the same period of time it would have massive spikes regularly in different directions. The continuity of monarchy during periods of major political and social change within a nation is one of the many benefits of Constitutional Monarchy.

This website stores cookies on your computer. These cookies are used to collect information about how you interact with our website and allow us to remember you. We use this information in order to improve and customise your browsing experience and for analytics and metrics about our visitors both on this website and other media. To find out more about the cookies we use, see our Privacy Policy. If you decline, your information won’t be tracked when you visit this website. A single cookie will be used in your browser to remember your preference not to be tracked. Privacy & GDPRAcceptDeclinePrivacy & GDPR
Thanks for subscribing!